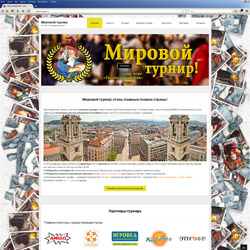 In Russia the tournament will be held from June to September 2016 in partnership with Lifestyle Boardgames (more information on the site http://saboteur-game.ru). The participants will compete in two categories: children (ages 8-18) and adults (over 18).

Thank you for ordering the quantity of the product in multiples of the package. Order will be assembled faster :)

Add to the basket to the games there, or completely replace the contents of the basket with this set